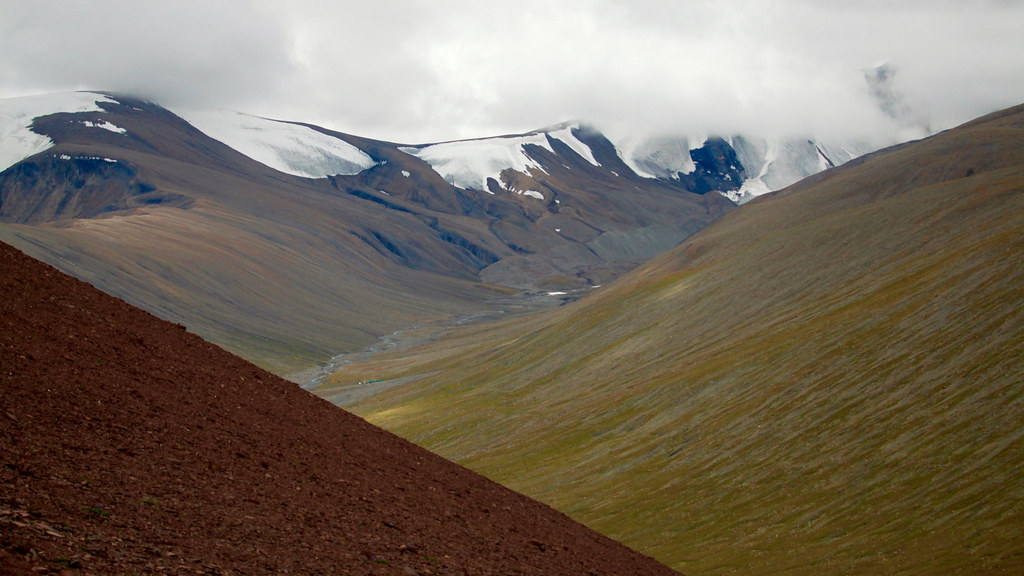 For a long time a plan to do a trek in the land of high passes (Ladakh) was brewing. Though some years back i walked the frozen Zanskar river, it cannot be called technically a trek since mostly it was a walk on ice. The sheer high altitude anywhere in Ladakh makes it even more difficult to acclimatise before a trek. Finally zeroed in on the Markha Valley Trek and headed straight to Leh.

With an hour flying, i landed in Leh and checked into the trusted Jigmet Guest House near the main market. The first day was spent as usual with rest and evening walk on the market. The second day was also pretty much same, except that i hiked to Shanti Stupa from the guest house for sunset and then back. I met up with my trek partner Oscar Hjelm from Sweden. He was equally exited about the trek.

Day 1 (24 July 2016): We started from Leh at 10 AM and drove till Chilling where the Markha River meets the Zanskar River. On the way we stopped at the confluence of Zanskar on mighty Indus in Nimmo. After a customary shot of the beautiful confluence we moved on. We reached Chilling at 11:30 AM.

The bridge to cross Zanskar was washed away in the floods in the past year. Now the only option to cross the rapids of Zanskar was a trolley suspended on a cable. The rush around the trolley was mind boggling and we waited for 2 hours to hop into the trolley. After crossing over we had a quick lunch in the tent on opposite banks. We finally started at 2:30 PM from Chilling. The initial part is a steep climb to the top of the hill and it tests your mettle. But after an half hour back breaking climb the views of the Markha Valley is awesome. From here on the walk is downhill and smooth till the village of Skiu where we camp for the first night.

We crossed over Kaya village, the first on the valley at 3:45 PM and reached the homestay in Skiu at 4:30 PM. The trail is pretty well defined and walk is almost always under the midday sun. Overall an easy first day trek in the high lands.

Day 2 (25 July 2016): The first night in Skiu was awesome. The clear skies and the amazing milky way made our night. We woke up at 6 AM. After a nice warm breakfast, we packed up our bags and stuffed the packed lunch. Today will be a long walk (20 kms) to the village of Markha.

The trail is very well defined and walking is almost always under the bright sun. After walking around 2 ½ hours we came to the first river crossing. The first time is always a challenge. But once we crossed, the cold waters felt so refreshing. We reached the Sara Village at 12:10 PM.

We had lunch and rested for an hour and then started from the village at 1:30 PM. The walk continued and we were feeling the altitude. The walk seemed like never ending till we reached Markha Village at 4:30 PM. Looking east we saw dark clouds in the end of the valley upto the peaks. Overall a long day but, once we reached the home stay, the feeling was awesome. It soon started drizzling and made us fear the walk ahead tomorrow. Markha is the biggest village in the valley and also has a dilapidated fort. There are plenty of campsites and quite a few home stays. The green and yellow mustard fields make a perfect contrast for photography.

Day 3 (26 July 2016): Today is a short day after a very long day yesterday. Today we will hike to Hankar village. Generally people hike to Thochuntse which is higher than Hankar. But due to lack of homestay in Thochuntse and also no confirmation of parachute tents, we have to stay in Hankar.

The trail today is very well defined and walking is almost always under the bright sun. We started at 8:30 AM. After 2 hours we crossed the Markha River and decided to take rest by the banks. Ahead there is a tributary to the river from the right side. The gorge is beautiful and marked by prayer flags. The left is main trail to Hankar while the right side leads to Rubring La

We reached the Umling Village at 11:30 AM. We had lunch and rested for an hour and then started from the village at 1:30 PM. Incidentally it was raining heavily during lunch. After the rain stopped, we started again, and reached Hankar at 2 PM. The village is beautiful. The trail is almost always under sun and commands nice views of Kangyaze (6400m). The overall trek was easy today and helped us acclimatise better for the long days ahead when we climb much higher.

Day 4 (27 July 2016): Today is going to be a long day. We started early at 7:15 AM from Hankar. Soon after that we had a big river crossing. The water never felt colder and stronger. After a couple of crossings we reached upper Hankar village. From here the climb starts to Thochuntse. After 2 hours we reached Thochuntse at 9:10 AM. The climb was tough and also the weather turned colder as the sun was hiding behind the clouds. We stopped at Thochuntse and had tea.

The route ahead is a steep climb all the way to the high plains of Nimaling. The weather turned bad and it started raining badly. We got drenched and the cold was getting unbearable. We reached a small lake on top of the climb and the views are all gone behind the clouds. We continued further and stopped somewhere to have our lunch. We reached the Nimaling at 1:00 PM. The climb was so tiring that we felt like end of the world. The altitude of Nimaling is at a staggering 4700 m and the rain made us all feel sick.

The Nimaling is a beautiful plain land at high altitude in the base of Kangyaze (6400 m). From here the pass of Kongmaru La which we cross to reach Hemis is visible. There is a big parachute tent for people to stay and also a vast land for camping. The altitude had an effect on everyone. I was feeling sick with mild fever and headache. I slept in the afternoon, till at 6:00 there was call for dinner. I decided to continue without any medicine and let the body take care of its own. The dinner was particularly very tasty. While having dinner, the weather was clear for a small time and the amazing sunset started in the plains. Almost everyone was out shooting the views. The feeling made me feel a little better. The weather was really cold up in Nimaling. The tent had couple of blankets and we tried to sleep but luck was not with us. Sleeping was really difficult due to AMS and i woke up several times in night. I felt that the possibility of crossing Kongmaru La is an impossible task.

Day 5 (28 July 2016): Almost the night never ended. But after hearing chatter around, i woke up and headed out. Coming out of the tent i felt better. The fever is no more, but the headaches is still there. The warm porridge for breakfast felt awesome.

We started at 7:00 AM from Nimaling. At moments it felt like i cannot make it to the top. I could see the hikers who started before me reaching the top one by one. After the most difficult climb till date we reached the top of Kongmaru La (5150 m) at 9:00 AM. The feeling of winning a battle cannot be explained. The view North was not good as clouds obscured everything. This is till now the highest point in my life which i trekked.

We started moving downhill after some photoshoots. The walk was tough as the gradient is very steep. After 1 hour , the trail enters a steep narrow gorge and then continues again with many crossing of the stream to Chogdo. We stopped here for a noodles break. The weather was very warm now and we removed all the warm clothes.

We continued further for 2 hours and then the village of Shang Sumdo was visible. The walk of 19 kms today was very tiring. After reaching Shang Sumdo we paid up the national park entry fees of Rs 20 per day. From here we drove to Leh which took about 1 ½ hours.

The most popular trek in Ladakh is Markha Valley Trek. The season is Early June to Mid October. Expect to get the Parachute tent in Nimaling in July/August which is peak season. This trek can be done without a guide and without tent or sleeping bags in July/August.

Homestay accommodation at all places except Nimaling, Thochuntse, and Gandala base. Almost all villages have electricity (erratic) and satellite phones.

Cost: In 2016 all homestays charge Rs 1000 per person per night. This includes unlimited tea, dinner, breakfast and packed lunch. The parachute tent at Nimaling charge Rs 1200 for the same.

Guide: Skarma Tsering, an young and energetic Ladakhi lad from Korzok Village near Tso Moriri, Changthang Plateu is a perfect guide for Ladakh treks.He is pursuing masters in tourism and public administration and loves rock music. Contact him at +91-9654106361 or starlonglife@gmail.com